VICSES volunteers responded to more than 1,200 requests for assistance (RFAs) after strong winds whipped across the state 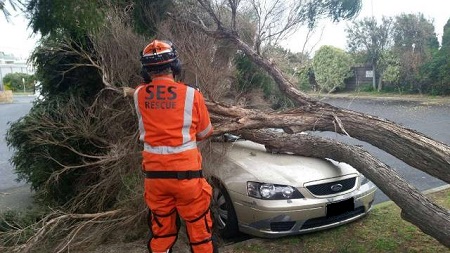 The majority of damage was sustained in the Melbourne Metropolitan region (869 RFAs) from about 3pm and finishing up at 6pm.  Hardest hit areas included Frankston with the VICSES unit attending approximately 100 jobs throughout the evening as a result of 109 km/h wind gusts.

Other areas significantly affected by the winds included Emerald, Narre Warren, Lilydale and Whitehorse.  The majority of the damage was a result of trees falling down and some minor building damage. Mt Evelyn Library sustained significant damage and several roads were closed due to fallen trees.

At its peak, over 33,000 properties lost power with 23,000 of these in Ferntree Gully, Croydon, Ringwood, Hampton and surrounds.

The VICSES Morwell Unit also attended a significant number of jobs later in the evening.

This is the second major storm incident in September and as such, a timely reminder for Victorians to get ready and prepare.

Simple tasks such as trimming over hanging branches, cleaning gutters and general home maintenance can help to reduce the damage to your property when a storm hits.  For more information on how to stay StormSafe visit the VICSES website ses.vic.gov.au/prepare