A small car can be moved by water only 15cm deep.

A mid-sized car can be moved by water only 30cm deep.

Fact: Since September 2016, almost 10% of Victoria SES requests for assistance related to vehicles involved in floodwater.
Share the campaign

A four wheel drive can be moved by water only 45cm deep.

Fact: Fatalities associated with 4WDs in floodwater have increased significantly in the last 15 years.
Share the campaign

Driving on flooded roads is dangerous, and it doesn’t take much to make your car become unstable, lose traction or wash away.

According to a float tank experiment using real vehicles at the University of NSW Water Research Laboratory, a small car can float in just 15 cm of water.

That’s the height of an average pen!

The dangers of driving in floodwater are a community safety issue.

The Victoria State Emergency Service (VICSES) has responded to over 100 requests for assistance related to vehicles that have become stranded in water in recent times.

The URL can point to any video file or a Youtube video.

Floodwater can be very deep, rise quickly and move fast.

Stay safe by never driving through floodwater. Leaving early before flooding occurs and going to family or friends on higher ground is always the safest option.

Research conducted by the University of New South Wales demonstrates that as little as 15cm of water is enough for a small vehicle to start to float, reducing the drivers control and endangering occupants. 15cm is the height of an average pen.

Recently, the ABC demonstrated what can happen if trapped in a car in flood waters, and what you should do before you call for help. Watch the video on the ABC program Big Weather.

15 to float was highly commended at the 2018 EMPA Awards and has been a key message for VICSES during recent flooding events across mass media and geographically targeted advertising, supported by the government.

Through our partnership with AAMI, VICSES has developed an augmented reality (AR) experience based on our 15 to float campaign.

The augmented reality experience is a ‘choose your own adventure’ where you are encouraged to make critical decisions related to flood water. Importantly, after you've completed the experience, we encourage you to make a pledge to never drive on flooded roads.

Try out this facebook experience by scanning the QR code now! 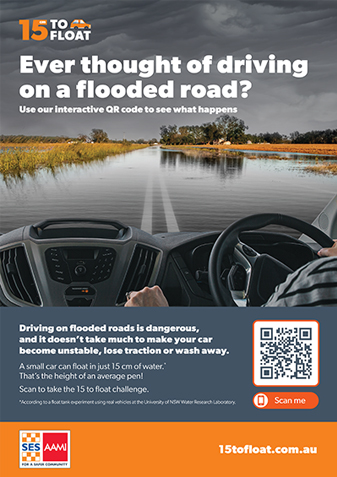