Geelong is situated at the meeting point of the Moorabool and Barwon Rivers and sits on Corio Bay. In Geelong, there are a number of areas lining the Barwon River subject to flooding.

Areas that sit on the Barwon River such as parts of Fyansford, Highton, Newtown, Belmont, Breakwater and South Geelong are at risk of flooding from the river.

Since 1852 there have been approximately 14 large floods in the region, with large flooding occurring on average every 10-12 years.

Flash flooding can occur with little to no warning in many parts of Geelong, including the CBD and surrounds.

Households and business should refer to their Local Flood Guide or Municipal Flood Emergency Plan  for more information.

Along the Barwon River there are many 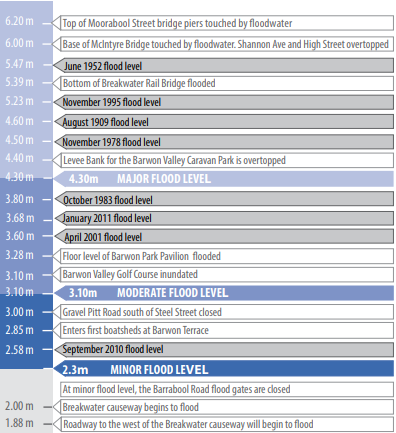 Areas that sit on the Barwon River such as parts of Fyansford, Highton, Newtown, Belmont, Breakwater and South Geelong are at risk of flooding from the river. Since 1852 there have been approximately 14 large floods in the region, with large flooding occurring on average every 10-12 years.

Flash flooding can occur with little to no warning in many parts of Geelong, including the CBD and surrounds.

The table to the right gives an indication of how Geelong will be impacted at different levels based on river height levels recorded on the McIntyre Bridge Gauge.

Barwon Heads and Ocean Grove can also experience flash flooding from heavy rainfall overwhelming the local drainage system. The effects of storms and flooding is likely to impact areas close to Murtnaghurt Lagoon, west of the Barwon Heads township.

Areas of Barwon Heads and Ocean Grove are also subject to flooding from tidal surge. Floods can be more severe when combined with a king tide.

Local knowledge indicates that the most severe flood experienced in the area was in 1952 which measured 1.9 metres on the Sheepwash Road Gauge. This flood was caused when 560 millimetres of rain fell over four days in the Otways Catchment, flowing down the Barwon River.

The map to the right shows the impact of flooding in the area at 6.0 metres on the McIntyre Bridge Gauge in Geelong, which is used for Flood Warnings for the area.

Hovells Creek is a shallow, slow moving watercourse that is filled when rain falls in the Northwestof the catchment and flows down through the Creek.

In heavy rainfall or in sustained rainfall over a number of days, homes and businesses in and around the township of Lara can flood and the town may be divided by the Hovells Creek floodplain.

In particular, the town centre is at risk of flooding, as the drainage networks become full and water builds up, spilling over into surrounding areas.

Due to the particularly flat nature of the landscape in the North East of Lara, flooding in the town lasts for a number of days. As there is a risk of flooding in the area, the City of Greater Geelong developed a flood warning system for Hovells Creek following the 1988 flood.

The warning system consists of three gauges in the Hovells Creek catchment area that transmits rainfall details to a base station and is then analysed to determine if there is a threat to residents. This network was built and is maintained by the Council and allows residents to receive a warning through usual channels for potential flooding.

Following the 1973 flood, a levee was constructed and completed in 1986. Following the 1988 flood the levee had to be repaired and approximately 600 millimetres was added to the height of the levee in some areas.

The map (right) shows the expected riverine flooding in Batesford when the Moorabool River measures 4.75m at the Batesford gauge. This height is 0.15m below the ‘major’ flood level (refer to page 4 of the Local Flood Guide).

Communities can use local flood guides to identify and better understand their local flood risk. They include information about: flood history, how to prepare & respond to floods and who to contact.

For information on flood warnings, see the VicEmergency website

Know your hazards - Flood
When to call VICSES