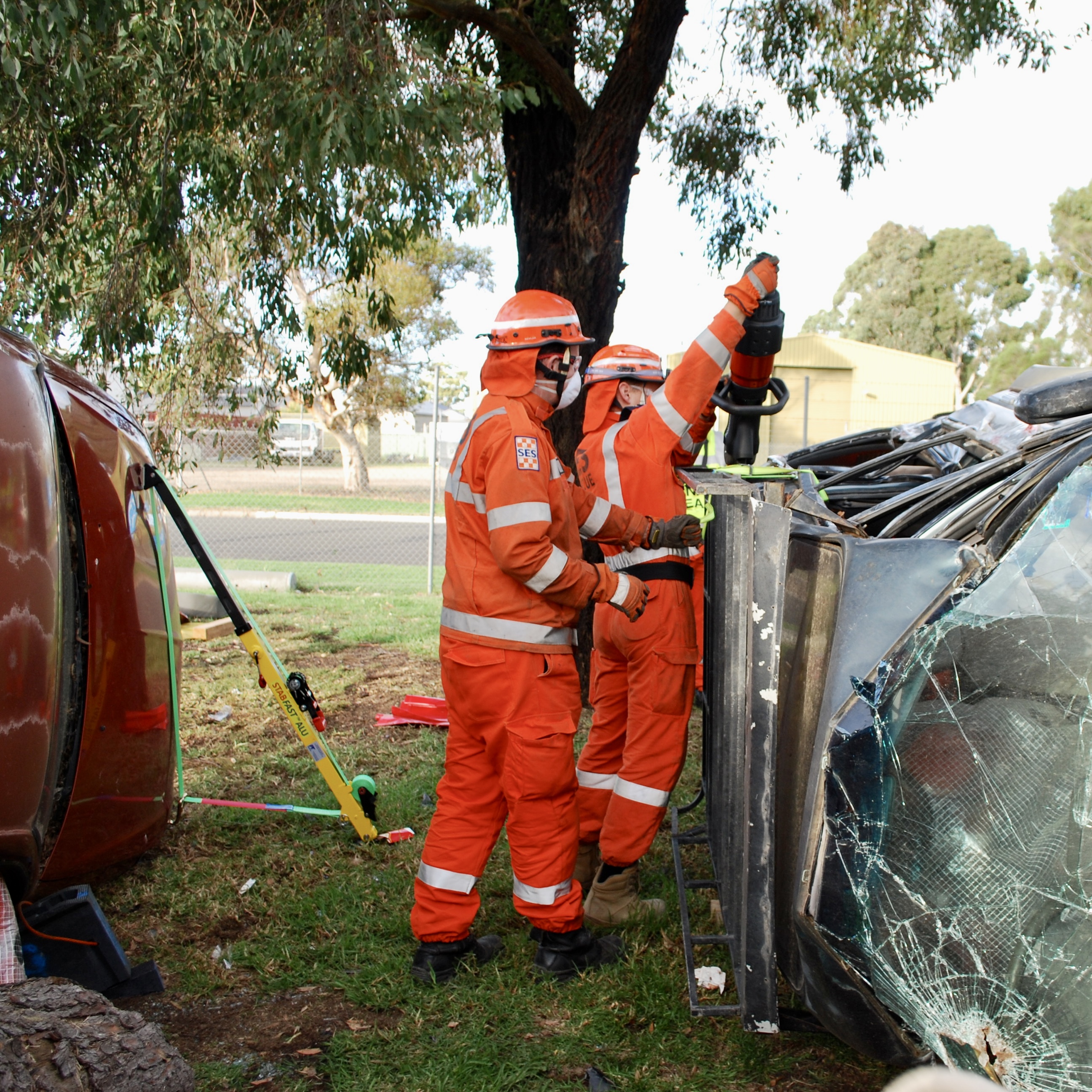 VICSES volunteers use battery-powered Pentheon tools in a crash simulation

VICSES is adding to its Road Crash Rescue capability with a new range of portable battery operated tools to ensure faster operating times on scene.

The core technology used for Road Crash Rescue throughout the emergency management sector, requires a pump at the end of a 20-metre hose, which pushes the oil up the hose to power the tools.

With these new battery powered tools, it’s all encased so the electric motor powers the hydraulic pump inside, so that our volunteers only need three pieces of equipment to extricate a patient from a car: a cutter, a spreader, and a combi-tool.

The rollout of the tools is already underway, with several units using the tools for the first time over recent weeks.

On Saturday, a rescue truck fitted with the new tools left the VICSES Morwell Unit, in Gippsland, to attend the scene of a nearby road crash in Heyfield. VICSES volunteers on board had all been trained to use the new Pentheon tool kit - a battery-powered system capable of cutting open a car - but this was their first field operation since it had been fitted, six weeks before.

Upon arrival on scene, Incident Commander Raelene Billingsley had her crew unload the tools as she made an assessment of the crash site, quickly deciding the crew’s first priority was to create an access point for paramedics.

Raelene used the portable spreaders to open the driver’s door, with the crew then focused on removing the rear offside door and ‘B-pillar’, to access the patient's seat and assess any further entrapment.  The patient was quickly and successfully extricated.

Along with VICSES Morwell Unit, the Sunbury, South Barwon, and Bendigo Units have all been provided with the equipment and necessary training to operate the new tools. VICSES Sorrento Unit undertook training with the new tools and had their vehicle fitted last month.

VICSES Sunbury Unit volunteers, among the first in the state to use the new tools, attended an incident in February where a vehicle rolled with a single occupant lying on the roof, inside the vehicle.

The closest that the volunteers could park their general rescue truck was still 40 metres from the scene of the incident, on an embankment. Had they used the core equipment, they would have had to unload the necessary pumps and hoses and other fittings.

A tree had pushed the middle pillar into the car on the driver’s side. In short order, VICSES Sunbury Unit volunteers removed both doors, including the b-pillar, and were able to slide the patient out on to the spine board and deliver them to paramedics.

Tidying up after the job was also less time-consuming, giving the volunteers time back to attend other emergencies if required.

The tools were used again by VICSES Sunbury Unit volunteers at the site of the recent  helicopter crash at Mt Disappointment. Because of the rugged and inaccessible terrain, it would not have been possible to reach the site with the old tools.

At VICSES South Barwon Unit, specialist RCR operators, possessing an average of seventeen years of experience, have been using the tools for some time, providing important feedback to the Assets team, as it manages the rollout of the new tools across the state. The VICSES South Barwon Unit volunteers, who compete in rescue challenges on at an international level, are working with the assets team around further design improvements to stowage and transportation..

“Operationally, I believe they will be of huge benefit to the community. Now, with no core attached, we should be able to achieve a lot more in a shorter period.”