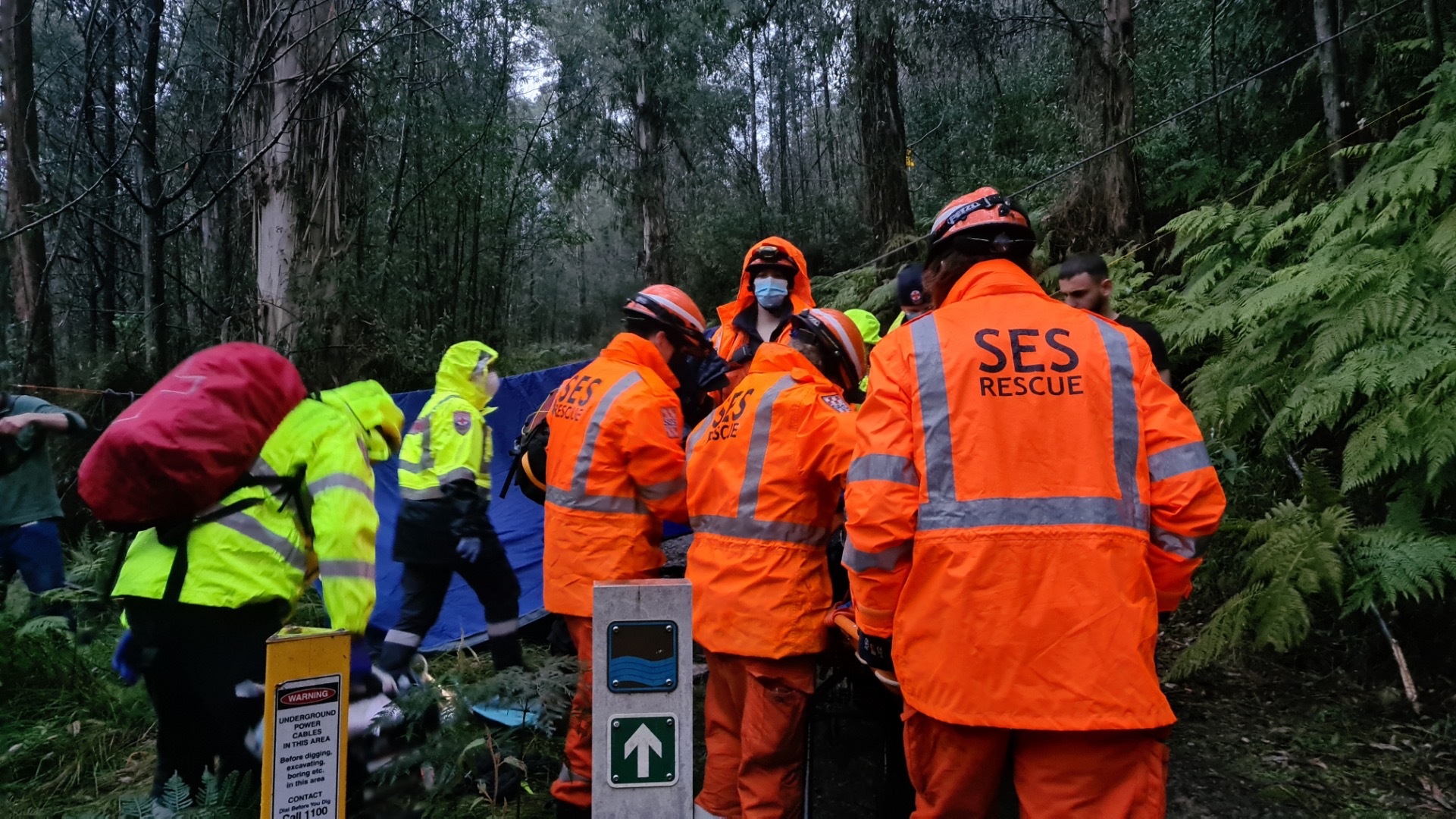 “If you’re going to get lost anywhere, do it in Marysville,” laughs Jo, the Victoria State Emergency Service (VICSES) Unit Controller for the area. This was the end to a busy, wet and cold Tuesday for the VICSES Marysville Unit volunteers, who had already been out responding to calls for assistance for hours.

At 2.45pm on Tuesday August 3rd, VICSES Marysville Unit volunteers received a call for help from two people trapped in a vehicle at Keppel lookout. “They were in danger of slipping over the embankment,” says Marysville Unit Controller Jo Hunter. The off-road travellers had followed their GPS and, though not intending to go off-road, mistook a walking trail for a driving track until the way became very, very narrow. “The lookout is a nice vantage point over Marysville, but it was sleeting and conditions were less than ideal,” says Jo.

The volunteers, responding quickly, sent three vehicles, though their efforts were hampered by conflicting reports about the location of the distressed couple. “There was very patchy reception so it was fortunate they were able to get in touch with us at all,” says Jo.

The volunteers knew the rescue would require the assistance of other emergency service agencies in the area, to help find the trapped vehicle, now in an off-road location and hanging from a precipice. “The vehicle was in a quarter-turn facing downhill, with the back wheels hanging over the edge of the track, down to a sheer drop below,” says Jo.

At the command point, Ambulance Victoria, the Country Fire Authority, and Victoria Police pinged the mobile of the travellers, to help VICSES volunteers narrow down the search area. “We had the ambulance on standby and initially we were asked to do a high-angle rescue,” says Jo. “Seeing as we weren’t sure initially where they were, our volunteers did the searching while the other agencies waited at the command point for confirmation.”

VICSES volunteers drove through windy and muddy paths, until the embankment began to close in, leaving the track ahead too dangerous to continue. The volunteers then took off on foot to search for the missing travellers.

“We stopped to get out of the vehicle, and that’s when we noticed some very faint tyre tracks,” says Jo. “There were also large ruts in the soft mud to the side of the track, which showed that the vehicle was fishtailing along, losing traction.

“We walked about a kilometre and found them, cold and a little shaken but otherwise well,” says Jo.

“We were able to get a report back to the staging area that we could put away the ropes, and downgrade the rescue effort to one of assisting the police,” says Jo.

However, the couple’s vehicle was assessed as being much too dangerous to move any further. “At that point, it was sleeting and raining, and the mud was already up to our ankles,” continues Jo. The track back from where the volunteers arrived on foot, had deteriorated. “But we did manage to get both the VICSES and Victoria Police vehicle back to the command post,” says Jo with relief.

Finally, upon their return, the volunteers diverted their crews to another job in Marysville - this time on the Tree Fern Gully track, where a mountain bike rider had suffered a fall and had significant injuries.

Having dropped the couple off to safety, the Marysville volunteers gathered again to debrief for the next rescue.

The VICSES Marysville Unit volunteers had already successfully completed two rescues on the back of a large search operation, the week before.  “We’ve been putting a lot of effort into our search planning and coordination, and into how we support Victoria Police to make their job easier,” says Jo, whose team - though tired and cold - were satisfied with what they had accomplished together.

“These three search events in the last week was where our planning really paid off,” says Jo. “We responded without delay and the team kicked into gear.”

“We plan for the worst and are aggressive in our response,” Jo continues, “in the hope we can avoid leaving people exposed to the elements or vulnerable to further danger.

“If you get it right at the start you can prevent that from happening.”

Asked if she had any advice, Jo explained how the public could avoid becoming the object of a search and rescue effort. “Look at the changing conditions around you and pay attention to your environment,” she says.  “In both search events the people involved had that initial tickle in their gut, that something wasn’t right, but they kept going.

“If you’re unsure of what’s ahead; stop, and reassess and - most importantly - trust what’s what’s in front of you, not what’s on your phone,” she says.

“It’s okay to back up, it’s always okay to turn around and sometimes the best option is just to go back the way you know.”