Hepburn Shire Council has a history of flooding including significant flood events in September 2010 and January 2011 which caused extensive damage to homes and businesses throughout the Shire.  The townships of Clunes and Creswick were hit the hardest.

Within the township of Clunes, there arenumerous homes, businesses andproperties at risk from 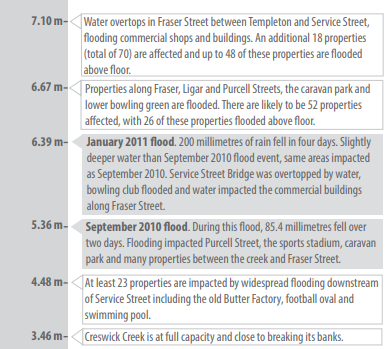 floods. Creswick Creek is prone to flash flooding which results from heavy rainfall over a short period of time overwhelming the creek’s capacity and causing it to overflow into parts of the township.

Clunes can also experience minor localised flash flooding from the smaller gullies and low-lying areas around the town. The earliest indicator of flooding in Clunes is when water breaks out of the creek moving west towards Purcell Street.

Records of 2010, 2011 and other historical floods show that low-lying areas including parts of Purcell Street, Fraser Street and the Clunes football oval and caravan park are prone to flooding following significant rainfall.

During the January 2011 flood, 200 millimetres of rain fell over four days, causing:

A river level gauge is located on Creswick Creek near Bailey Street. The table above provides an indication of what may be expected at different gauge heights.

flooding occurs because rain falls faster than the ground has the ability to absorb, causing water run-off into low-lying areas and local drainage systems. Local drainage systems are unable to cope with the volume of water causing the water to rise rapidly, flowing powerfully and quickly.

Flash flooding in Creswick has been frequent throughout the 1800s and 1900s, with significant floods reported mostly following a period of drought. Flash flooding occurs so quickly due to heavy rainfall that you may not receive an official warning.

The table to the right shows measurements for the river level guage located on Creswick Creek near Bailey Street.

Communities can use local flood guides to identify and better understand their local flood risk. They include information about: flood history, how to prepare & respond to floods and who to contact.

For information on flood warnings, see the VicEmergency website.

Know your hazards - Flood
When to call VICSES