The skills and expertise of VICSES, combined with effective multi-agency cooperation, has saved the life of a Portland man following a difficult cliff-side rescue.

Volunteers from the Portland Unit responded to an incident in the early hours of last Tuesday morning where a car had plunged off a nearby cliff, falling 30 metres and eventually resting on a ledge.

The Portland Technical Rescue Team, consisting of both CFA and VICSES members, worked together to reach the man, along with three dogs and two parrots also trapped inside the overturned car.

Combining equipment from a technical rescue equipment cache, including rescue rope, an air-bag system, and a lighting trailer provided by the Hamilton Unit, the rescuers were able to carefully raise the car and free the man before he was air-lifted in a helicopter to a hospital, along with his pets. Sadly however, one dog did not survive.

Scott McFarlane was one of the Portland Unit volunteers and part of the Portland Technical Rescue Team responsible for freeing the man, and personally lifted one of the parrots to safety after it took refuge on his shoulder and refused to budge.

“We made an initial safety assessment on site and continued to monitor the situation – the safety of our rescuers is always our primary concern,” Scott said.

“It’s great to be a part of such a dedicated team. It was our combined training and expertise that resulted in such a good outcome.”

The team were well-prepared having undertaken organisational training together to offer the very best services in emergencies and work together.

Scott is now caring for both parrots involved in the accident while the owner recovers in hospital.

“I thought it would be nice to reunite him with his pets once he got out of hospital.” 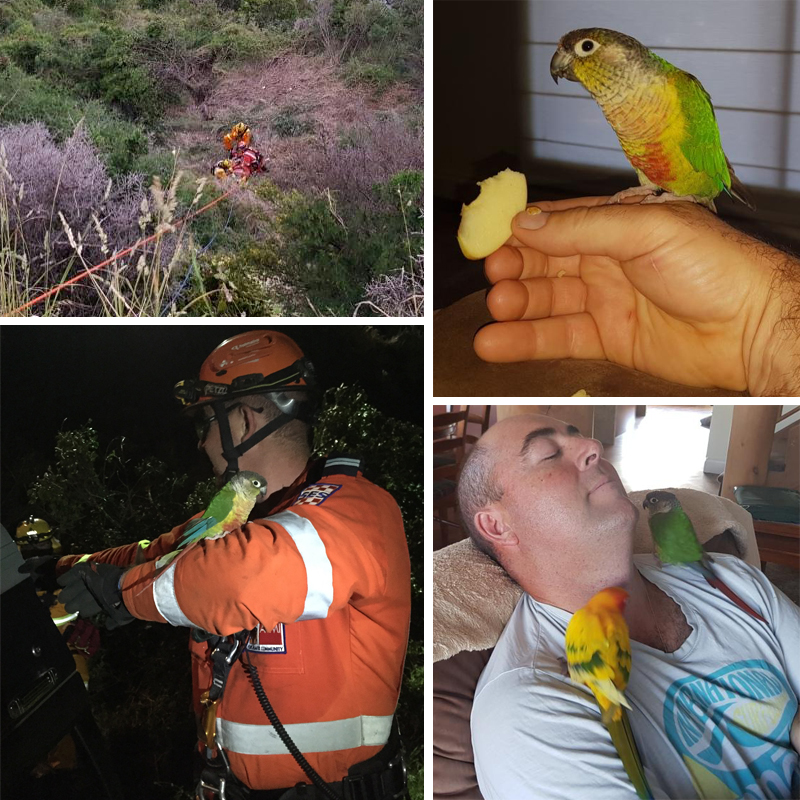